The Payette Lake chapter of the Antique and Classic Boat Society held their 1st annual ‘Chase For The Ace’ poker run on Payette Lake in McCall, ID on August 22nd.

August 22nd began as a cool, overcast day hampered by smoke from fires raging throughout the west. But after having to cancel this year’s boat show on beautiful Payette Lake we were determined to maintain our social distancing on the lake with the fun run. The temperatures were predicted to be in the mid-80s, great for a late summer day on the water. There was a nice breeze, but not so much that it caused high waves. All-in-all a perfect day for our planned poker run.

Everyone formed up at the municipal docks at Art Roberts Park in McCall. Nine boats showed up that covered the gambit of antique as well as classic models. We had a total of 24 people driving and riding.

Holly provided some breakfast snacks at the dock and then we were off to the first stop – Steve Ryberg’s dock on the west side of the lake. The parade of boats to the first stop got lots of thumbs up from those viewing along the shore. At Steve’s he handed out envelopes with the first cards using a long pole from his dock.

At North Beach we pulled the boats ashore on the beach and got them squared away. We awarded several prizes. Best poker hand went to our chapter president Greg Plummer, with a full house. I still think we need to investigate how this happened! The prize basket included a wood boating hat, a Patron floating key chain, a woody boater mask, a bottle of wine with a life preserver (just in case it fell over the side) and an American Runabout history book. Second best poker hand prize went to Lori Putman with a pair of Jacks. Her prize was a Payette Lake embroidered hat plus a woody boater mask. Worst hand prize (I won’t reveal what it was) went to Patricia Minor. Her prize was a pair of drink coolies labeled ‘Captain’ and ‘First Mate’ plus a woody boater mask. Who is going to wear which hat Patricia?

President Greg and his lovely wife Laura provided fresh made sandwiches along with drinks and snacks to finish out the outing. After some time to socialize we all climbed back in our boats for the run back to McCall. The chapter appreciates everyone joining us and hopes all had a good time. We will be doing more of this throughout the year. Looking forward to seeing everyone at next year’s ‘Run For The Ace’. 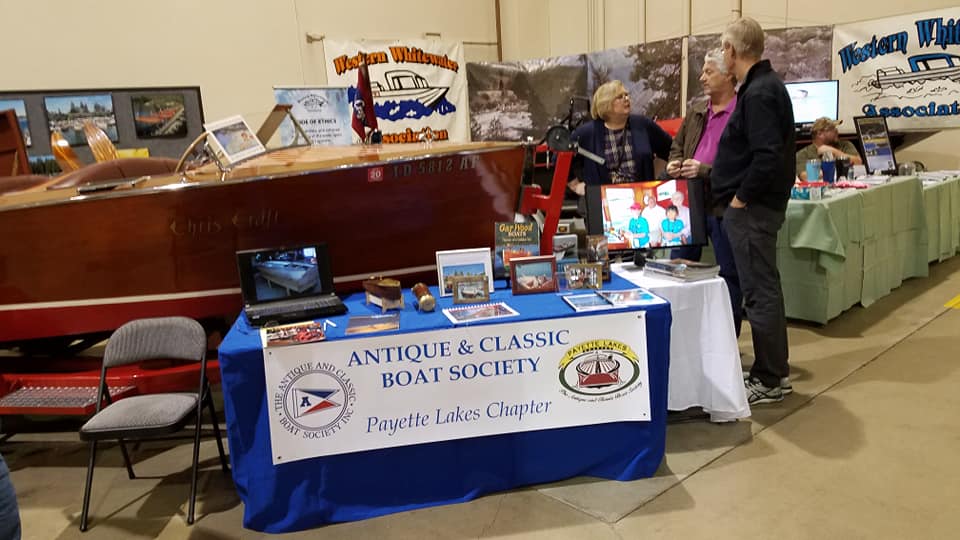 We want to thank those that manned the booth and talked with the many interested people stopping by. Those are Gary Lyons, Marj and Mike Dougherty, Greg and Laura Plummer, Barry McCahill, Chuck Dollar and Lloyd Putnam. Plus a big thank you to Mike and Marj for providing their 1938 17’ Chris Craft Runabout. It was a hit!

The show drew over 2,500 attendees. We had at times a steady stream of people stopping by and at other times some lulls.  But overall there was a lot of interest in our ‘non-plastic’ display at the show. The majority of people had either not heard about the upcoming July 24-26 McCall boat show or were interested but didn’t know when it was, so handing out a flyer with that information should prove to be beneficial to increased attendance. We did get some interest of joining ACBS and the chapter so we will have to see how that plays out. There was a lot of discussion on wood boats, restoration, how they sound on the water and many thumbs up from those we did talk with.

What a great show we had July 26-28 at the Shore Lodge in McCall, Idaho!  Thirty-six boats representing the best in antique and classic wood, classic glass, contemporary and reproduction wood!  Check out the 2019 directory in the ‘BOAT SHOW’ pages to see all the great craft!

The weather could not have been nicer, not a cloud in the sky!  An estimated 1,500 people walked the docks over the three day show and enjoyed the beauty and elegance of the fine watercraft on display. The activities were well attended and the awards banquet was fantastic. See the 2019 winners in the ‘BOAT SHOW’ pages!

The club’s mission of fostering relationships with the members and educating the public was accomplished in spades. Of course, we could not have done it without wonderful sponsors, which included Bretz Capitol Sports Sales, Prestige Water Sports and Hagadone Marine.